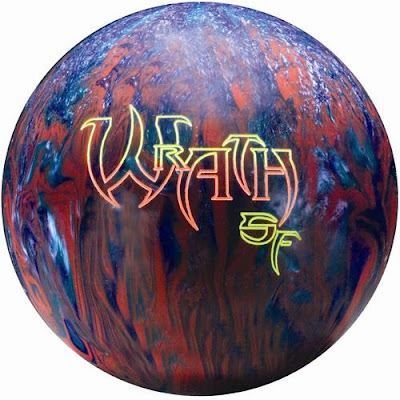 Yeah, the name is tacky, but at least the rest of the ball isn't ugly. The ball is 14lbs, and is going to take some getting used to. It was on clearance, which means I got it for $50 off and for just a couple dollars more than the el-cheapo model. Hooray for marketing product cycles! The new model is identical except they made it uglier and changed some wording. I also bought a new bag to go with it that holds my shoes.
Posted by Jason at 6:47 PM No comments:

So, I tried to upgrade a server at work today to the newest most awesome OS X 10.5 Server from Apple. This particular server is not currently in live production but will be soon -- it is a meta data controller for the SAN we're about to install. If you're not a tech geek I don't expect you to know what that means, but bear with me. The point is, it's not a machine that people will call panicked when it stops working -- nobody knows about it yet. The hardware itself is recycled: it's an old file server that was removed from active use a year ago when we moved into the new building. As such, it's about three and a half years old.

I pop the 10.5 install Disc into the drive and boot. Computer gets angry at me and spits it back out, and thus I encounter the first problem: stupid old cheap servers have CD-ROM drives and can't read DVDs. The install media is a DVD. Can't install off of a disk, so we go to plan 2.

Plan 2 is to create an image of the disk and attempt to network boot the server off of said image and run the installer. Halfway through the boot process, the server decides "nope. i don't feel like it" and just flat out turns itself off. I have never seen this behavior before, but it insists on doing it several times. No worries... onto plan 3.

Plan 3 is to find an external DVD-ROM drive and hook it up to the computer via FireWire, then boot off of it and install the software. I try the front firewire port on the computer... not working. Try both ports on the back... still not working. I must have a bad drive. I try a different drive in all the ports, and it doesn't work either. Then, I remember: The FireWire controller on this particular computer is broken. I am starting to get annoyed. This is why we don't normally use old hardware -- it's too much of a pain in the ass. On to plan 4.

Plan 4 is to find a replacement internal optical drive for the server that will read DVDs. I debate stealing one temporarily from another (live) server and think better of it because the server is in fact live... then head back to my office to see about purchasing said drive. The Internet says they cost $200... not a viable option. Then, I notice: They are the same part number as drives that are fitted into Apple Laptops!

Time to cannibalize a drive from an old laptop. I find one and install it. It works perfectly. Victory, at last. And what a pain in the butt. Ugh.
Posted by Jason at 6:02 PM No comments:

I received my check for Jury Duty today. Comes out to $4.42 per day for mileage and $15.00 per day for my time... for three days. Expenses incurred didn't exceed this amount, so I guess that's good.
Posted by Jason at 5:50 PM No comments: