Darrick and I took some time this evening to sit down and hash out the details of our Vancouver road trip next month. We need to start booking hotels, and before we can do that it helps to know which cities correspond with which nights.

Here is a road map of the proposed trip. The tentative schedule is as follows:

If we keep to this schedule, we'll be out of the country for about 5.5 days. If we can't find at least one hotel in Canada with free WiFi, we may both go through some pretty serious Internet detox withdrawls.
Posted by Jason at 11:53 PM 2 comments:

So, the new $34 glasses arrived on Saturday. After a quick trip over to LensCrafters to have them adjusted to fit my face, they have been available for me to use.

I think I need to take them and get them adjusted a little bit more -- they still sit too high on my nose and are a little loose behind the ears, but those are things that can be easily fixed. Aside from the adjustment issues, the only real complaint I have with them is the anti-reflective coating. Either they forgot to add it, or the one added sucks. There's plenty of glare (from any light source) on the lenses when I wear them indoors.

As far as the frame goes, it's pretty representative of the picture they provided on the website. The metal surrounding the lenses is a bit shinier than I expected, but hopefully I will wear this off quickly. If I'd had the opportunity to try them on in the store first, I suspect I would've vetoed them on account of the color. For the price I paid though, I'll quit complaining. The most important thing -- the prescription -- is correct, as far as I can tell.

For anyone else who wants to try their luck with blind* shopping for their optical needs, they can find the web site of the company I bought my glasses from here.

I'll post a photo once I get my new camera on Friday.

I made some minor changes to the blog layout yesterday. Over on the right column, I added a "recommended reading" section. This section shows the most recent posts on some of the blogs and news feeds that I follow on Google Reader. I was toying with the idea of adding a Google search box as well, but I didn't like the way it looked on the screen. Let me know what you think.
Posted by Jason at 11:34 PM No comments:

Wow. Someone must've spent some time on that.
Posted by Jason at 6:24 PM No comments:

For anyone who cares:

I am currently planning to be in Sacramento from August 7 through 10, October 1 through {undefined*}, and November 24-27.

* Undefined = 10/5 or 10/10 depending on several external circumstances such as: (a) whether I can actually take that much time off work, (b) what the weather is like while I'm up there, and (c) whether I can stand sleeping on that horrible twin mattress for that long.
Posted by Jason at 1:40 AM No comments:

Last month when I was in Ohio with my sister, I used her camera to take some pictures. I had brought my SLR, but found that most of the time I was there I didn't want to use it because it's too bulky and a bit of a pain for just taking simple snapshots of things. I have an old Olympus C740UZ camera, but it has essentially been retired because it is (a) too slow, (b) too bulky for a point and shoot, and (c) only takes 3-megapixel images.

Fast forward to today: I received a small amount of compensation for participating in a survey. Also, some rebates came for me in the mail last week. Though normally I'd be stingy and put that toward the "buy a house" fund, I decided to actually spend it for once. I liked Nicole's camera when I was in Ohio (with the exception of its being pink) and decided to buy one for myself because it was on sale for $50 off. Currently it's listed for $179 at Amazon if you get the silver color, and $199 for the others. Here's what it looks like: 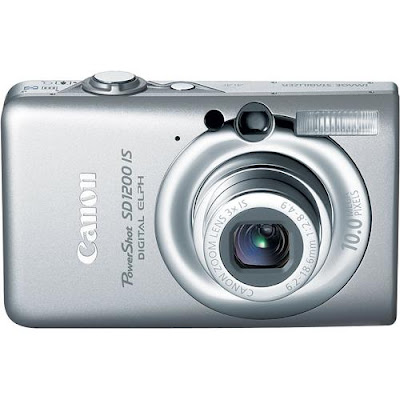 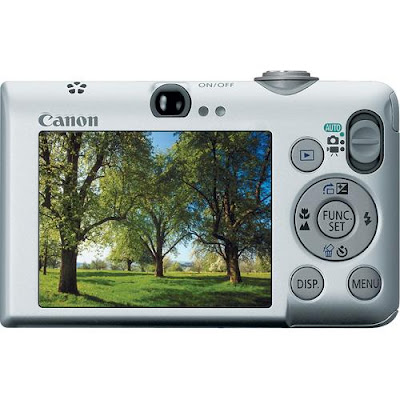 Some statistics: This camera has a 6.2-18.6mm 3x Image Stabilized zoom lens, which equates to about a 35-105mm range on a standard 35mm camera. Or, if you have a Canon SLR like mine with the 1.6 crop factor, it equates to about 21-65mm. I take most of my pictures within this range anyhow. It can shoot 1.4 frames per second and takes SDHC memory cards. Supposedly, an 8GB card (sold separately, of course) holds about 3,000 pictures or just a shade over 1 hour of 640x480 video at 30fps. A single card should be more than adequate. The CCD comes in at 10 Megapixels, which is actually a 25% improvement over my 8MP Digital Rebel XT.

Most importantly though, this camera weighs a whopping 4.23 ounces and has dimensions of 3.48 x 2.16 x 0.86 inches. At nearly 5 pounds fully equipped, my Digital Rebel is roughly 19 times as heavy.

If the shipping gods look upon me favorably, I should have this new toy in my hands in time for Walter's wedding next weekend.
Posted by Jason at 12:58 AM No comments:

International data roaming can get expensive quickly. For example, opening an email with a 5 megapixel picture in it, or downloading a 3-minute video on YouTube, each takes about 2 MB of data. The cost would be almost $40, based on pay-per-use international data rates of $0.0195/KB.

Translation: Good thing I checked this before leaving. Options: Turn off data entirely while out of the country, or pay at least $25 to check email in the mornings and hope I don't need Google Maps.

Sending Text Messages When Outside the U.S.: $0.50 per message sent. Home package rates apply to all text messages received when roaming internationally.

Translation: You can send, but I may not respond. This seems somewhat lenient for AT&T.

On Friday, I came into the office (company holiday) to make some modifications to my office in hopes of stopping all the annoying rattling in my ceiling. I popped out the HVAC return register and lined the ceiling grid with felt... then put it back in. It stopped those rattles.

Problem is, now the supply register is rattling. I may have to do the same with it. Hopefully, once I do that it won't extend the problem to the light fixtures -- but it might. My office is cursed.
Posted by Jason at 10:00 AM No comments:

Got an e-mail today saying that my new eyeglasses have shipped USPS. The Saturday holiday will surely screw with the timely delivery of said package, but it should be here early next week nonetheless.

UPDATE 7/11/09, 1:31 AM: "Your item was processed through and left our SAN DIEGO, CA 92186 facility at 12:24 AM on July 11, 2009. The item is currently in transit to the destination. Information, if available, is updated periodically throughout the day. Please check again later."

Sounds like they should be delivered tomorrow (well technically, later today.) Hooray!
Posted by Jason at 11:41 PM No comments: