Notes From the Road, Day 3

We kicked off today at 5:30 AM, when some "strange noises" coming from the room next door woke me up. You know what I'm talking about... enough said. Later in the morning, I had the pleasure of discovering that the plumbing in our hotel room is terrible, both on the supply side (majorly inconsistent water pressure) and the drain side (our shower more or less doesn't drain.)

With the issues of the morning out of the way, we made our way two blocks down the street to the Springdale Loop shuttle stop to catch the free shuttle that goes to the visitor's center at Zion National Park. From there, we paid our entrance fee ($12 per person or $25 per vehicle) and walked through the park gate and over to the Canyon Shuttle stop. We rode the Canyon Shuttle to the end of the line and hiked for a mile on the paved river walk trail to get to the start of the Zion Narrows hike.

For those of you unfamiliar with the Zion Narrows, it's essentially a hike through the Virgin River (upstream in our case to start, downstream on the way back) where water shoes and a walking stick are required. More than 90% of the hike is through the river itself -- we were frequently wading in knee-high water. In a couple of places, it got up to my mid-thigh. We hiked upstream for about 2 hours and 15 minutes when our pre-set alarm went off and told us it was time to head back. The return trip took a bit over an hour because we didn't stop for pictures and because going with the current downstream is significantly easier than going against it. Courtesy of Darrick, here's a panorama of one of the less-wet portions of the day. That would be me standing there holding our hiking sticks.

After returning to the trailhead for the paved trail, we stopped for a bit to dry off our feet and change back into our hiking boots (which thankfully hadn't been stolen, since we left them there with other people's shoes instead of taking them in the river with us) and walked back down to the shuttle stop. After that, we returned to Springdale and had dinner at a Mexican Cafe. Now, we've returned to our room to look at our pictures for the day. They look good.
Posted by Jason at 8:49 PM 2 comments:

Notes From the Road, Day 2

I'm writing this entry from the passenger seat of the rental car. We're on our way out of Vegas at the moment, headed toward Zion National Park. Darrick is driving.

Today, we stuck to the plan: check out of the hotel at 11am, and then head to Hoover Dam. We arrived at the Dam at about 1:00 PM and went on the Dam Tour at 2:30. We left Hoover Dam at 4:00 PM, and pit-stopped in Las Vegas for fuel at about 5:00 PM. We're now headed toward Zion, and expect to get there around 9:30 PM local time (factoring in the loss of a time zone and stopping for dinner.)

Notes From the Road, Day 1

Our road trip began in San Diego. We departed from my apartment at about 9:30 PM, headed toward Racetrack Playa in Death Valley National Park.

Just before midnight, we stopped in Hesperia to top off the gas tank and grab a bite to eat prior to getting on US-395. Though the food at In-N-Out is quite normal at midnight, the same can't be said of some of their customers. There was one man in the store who appeared to order two items -- a strawberry shake, and a water cup. He proceeded to fill the water cup about 1/3 full... with ketchup from the ketchup pump. Remember... he didn't have any food. Just a strawberry shake. We left before seeing what became of the ketchup.

At 3:30 AM, we encountered our first major problem of the trip: Neither of us checked to make sure that the roads we intended to traverse were passable. This isn't a problem when all the roads are open and in good working order, but when coming across a "Road Closed" sign on an unmaintained desert road that goes over a mountain in the middle of the night... that's a problem. We spent 25 minutes debating what to do, and ultimately decided to modify our route, attempt morning photography at the Sand Dunes near Furnace Creek since it was close enough to be reachable by sunrise.

Around 4:45 AM, we see an FJ Cruiser in a turnout with its hazard blinkers on, and a man with a head lamp on waving his arms as we drove by. Since this was the only vehicle we had seen in hours and it just seemed like maybe the guy was in some sort of trouble, I turned around to make sure he was OK. He wasn't. At about 10:00 PM as he was taking a curve to the right in the road, the entire front passenger wheel came completely off his vehicle. By some sort of miracle, he skidded directly into a turnout where he came to a stop, instead of going the other way off the cliff. Five of the six lug bolts on his axle had completely sheared off, rendering his vehicle completely immobile.

Apparently, we were the 9th car to pass by in the almost 7 hours he was stranded there, and the first to so much as slow down. We collected an assortment of information from him (his roadside assistance number, name, VIN, exact GPS location, and the closest mile marker) and called CHP and a tow truck for him as soon as we got to a pay phone, which we found at a park entrance station about 20 miles down the road.

The delays we encountered for doing our good deed put our arrival time at the sand dunes about 10 minutes before sunrise. Unfortunately, this eliminated our planned "nap time" as well as impacted the volume of photography we were able to do... and forced us to rush things just a bit. We'll have to make another attempt at sunrise photography later in the trip. While we were there, we decided to go play around on the dunes a bit to get the blood flowing, and then got back in the car at about 7am, planning to get to Las Vegas as soon as possible. We needed sleep.

We arrived at our hotel in Vegas at about 11:00 AM, and "pre-registered" for our room. We were told to come back after 1:00 PM, because our room would not be ready until then. With three hours to kill and both of us being exhausted and hungry, we went to the brunch buffet at Paris. Honestly, I was so tired I didn't care what the food tasted like -- but I'm pretty sure it was delicious. I had a large plate of "breakfast" food followed by a large plate of "lunch" food, followed by a plate of desserts. We finished eating with even more time to spare... and being the geeks we are, we went to Fry's Electronics to kill the rest of the time. I bought some blank CDs to burn MP3's on (Our 4Runner has an MP3-CD capable stereo, but the AUX jack for an iPod sucks) and some cough drops. Darrick bought a Slinky.

We got keys to our hotel room at 2:30, and immediately went to sleep. We went to dinner at a Chinese restaurant recommended by Walter's mom around 8:30, and took a stroll around the strip just after midnight. 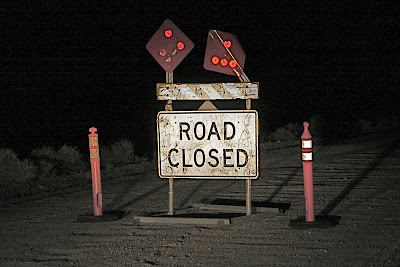 Here is the modified trip map. (EDIT: The map is wrong. I need to fix it.) Marker "B" is where we encountered the closed road and had to turn back. Marker "C" is approximately where we stopped for sunrise and took some time to go climb on a bunch of sand dunes.
Posted by Jason at 7:33 PM 2 comments:

At this particular juncture in time, I am not 100% certain that will be able to attend. I plan to go, but there may be outside circumstances that prevent me from attending. I'm already pretty busy at the beginning of the year, so we'll see. If I can make it work though, I do plan to be in the Bay Area in early January. Just as a heads-up for anyone who cares.
Posted by Jason at 11:26 AM No comments:

With just days left before departing on the road trip mentioned in a prior post, a few updates:

(1) After careful deliberation, it was decided that the cost-benefit analysis for the question of "What type of car should we rent?" had tilted to favor a "Standard SUV" instead of a Prius. As the economy has faltered and the price of gas has risen, the cost of renting an SUV has fallen dramatically -- to the point where renting the SUV and paying for the additional gas it will consume on our voyage is virtually identical to the higher rental cost (but lower fuel cost) of the Prius. The added benefits of the larger vehicle include more cargo space, more "nap" space, and 4-wheel drive... which enables us to trek on some of the higher clearance, less-traveled roads that have in the past provided some of the most breathtaking views we've seen.

(2) Sushi has been moved from Mr. Sushi in Encinitas to Nobu in Solana Beach. I've never been there before, but hear it's delicious.

(3) The final night of the trip is still up in the air. Once we depart from the Grand Canyon, we have several options on how to return to San Diego. The original plan calls for spending a night in Phoenix, but we still have not booked a hotel room there yet as a means of keeping our options open. There are four different "major" routes we can take to get back to San Diego from the Grand Canyon -- only two of which go through Phoenix or the surrounding area. Option 1 takes us directly from the Grand Canyon to Barstow on I-40, where we meet up with I-15. Option 2 takes us on US-40 to US-95 and some State Highways to I-10 near Joshua Tree and through Riverside County, where we'd meet up with I-15. Option 3 takes us East on I-40 to I-17 and down to Phoenix, where we would meet up with I-10. Option 4 takes us on the same route, but further South from Phoenix, where we meet up with I-8 and head back to San Diego along the Mexican border. Addtionally, there are a number of State and US highways as well as Forest Service roads we may try to navigate, now that we have a larger vehicle in which to do so. Picking a route may prove to be difficult -- all of the options are "new" to us. We planned originally to stop in Julian on our way back to San Diego, but depending on the route we take and the time of day we're near the area, the Pie shops may not be open. We'd just have to make a quick trek out there the next morning. :-)
Posted by Jason at 9:03 AM 5 comments:

The computer responsible for hosting all of my photo galleries failed spectacularly this afternoon. The problem is most likely some form of massive hardware failure. Things may be unavailable for the next week or so.
Posted by Jason at 6:51 PM No comments: